Fights Never Get the Job Done

I hope that I am not having to keep you waiting for too long to hear from me. By the grace of the Lord Jesus Christ, I will resume fully soon and we can keep enjoying each other’s company.
I got this interesting message that I want to share. On this marriage issue, we are all learning and I believe we can learn big from this hilarious marriage story too.

SHE WROTE::: Good day ma. Thanks for being there for me. I will appreciate if you can share my experience on the group. I promise myself to share if the drama works. This is just to fulfill my promise ma
VC asked me to act sick end of April. She said I should get Cardigan, aboliki (Chinese Balm), anti-malaria, panadol and scarf as my costume. I couldn't do as she advised because my boss didn't allow me go on leave as planned till end of May. Fast forward to first week in June, I didn't tell my hubby I was on leave. I only told him I was down with fever and won't be going to work. He forced me to eat breakfast and I removed first dose of anti-malaria, flushed it in the toilet and went back to sleep. It was on a Friday, hubby left for work, kids left for school and I began to watch TV, ate good food till around 7p.m when I carry my costume begin dey sleep again like person wey truly get malaria. I told him I won't be able to go to the market to shop for food stuff + grocery as the malaria still dey worry me. He left for the market Saturday morning with the list I gave him. He came back complaining that things are too expensive. Did I tell you he used to give me 35k as monthly feeding allowance for family of 5? Yes, that was my cross, we would fight, insult each other still he refused to add to the money. I got tired of fighting and decided to get EGS involved. That is how this drama tin start o. I watched my husband complaining bitterly about yam and tomatoes. He kept warning our first child not to waste food. My daughter told him milk has finished just 3 days after he bought 400g can. Hubby started shouting 'is this how these children eat?' I just sit down on the bed in my Cardigan watching them. I responded 'that is why I begged you to increase the feeding allowance but you think I wanted to pocket your money, you never say thank you when I told you I spent about 100k on feeding every month' He said, ha! I can never imagine tomato is now #80 per one, 5 balls for #400.
I acted sick for one week. It wasn't easy but I just had to do it to get my freedom. Only God knows how much he spent taking care of the home front in that one week. He credited my account with 50k and gave me 70k for the month of July. The most interesting part is, he gave me the money with so much humility. He said 'my dear, please manage this 70k, I will keep adding to it by God's grace,’ to be submissive is no longer hard for me. I love him better and no more fight. I also appreciate how Arewas always come out en masse to talk sense into whoever needs it. I truly appreciate EGS. What I tried to achieve for years with so much bitterness is now a thing of the past.

This message didn’t originate from me, and so there are a lot of acronyms there that I don’t really know its full meaning, like EGS and VC. But I sincerely find this as a very hilarious and practical way of getting issues resolved between a wife and her husband on the finances of their home. I am so glad this woman was able to apply this approach that didn’t entail force, fighting or quarreling. I just wish women will understand that force and fighting really don’t get the job done.
In as much as I don’t encourage deceit in marriage, but I am trying to understand how much of fights this woman must have had to put up with before being introduced to this wise approach that has fetched for her in marriage what the many fights could not fetch.
Just before settling down to write this piece, I called one of my friends who rushed to me some months back to seek help on her troubled marriage. She had read my story on my blog and she desperately wanted to talk to me. We sat down to talk and one of the truths that I shared with her was the fact that fights don’t solve the problem. They never do. Today when I called her to wish her a belated Happy Birthday, she was telling me how things are turning around in her marriage. She sounded happy and hopeful. That was not the case some months back when we first spoke, but now the story is changing. She is not fighting anymore, she is doing other things that are yielding better results for her. It's called godly wisdom


I know that not all can apply the method of this woman whose story is shared above successfully. Not every husband can react the way the husband in the story above reacted. It's not a stereotyped approach and men are different and should be handled differently. But when you truthfully seek God’s intervention in your marriage He will show you that method that will work for your peculiar situation in marriage. God never runs out of ideas that work, but fights never get the job done.
Posted by Derin at 14:59 2 comments:

Don't Seek The Demon in Your Wife 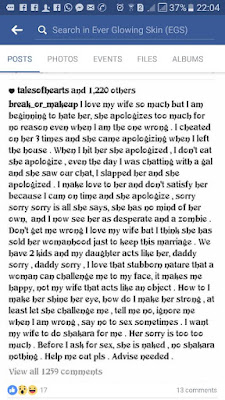 Hello people, it’s been about a month since I posted on this blog. I haven’t been anywhere, just occupied with writing books. Once done with the book in which I compiled previous marriage posts from this blog, I began writing another. In due season, you will have them to read in Jesus name.


It is okay to seek a vibrant wife, but never seek the demon in your wife because when that demon is unleashed you won’t be able to curtail it. When you want the best from your wife, give her the best. Engage your wife in constructive discussions and you will be amazed at her level of intelligence. When you want to know what your wife is capable of, give her task to handle and I can assure you she will surpass your imagination. It is only in love that you can get the best from the gift of favor that the Lord has placed in your life in the person of your wife.
Posted by Derin at 17:53 No comments: