I learned a big lesson from the book of proverbs on what I want to call the silent treatment. Unlike what we are accustomed to on the need to express ourselves and how we feel, what I learned from Proverbs 17:28 and Proverbs 18:2 speaks more on the gains of keeping silent rather than expressing one’s self most especially when the timing is wrong. The inability to keep silent at the right time has led to a lot of abuse in marriages and even deaths in marriages.
Surprisingly, Proverbs 18:6 (NIV) says the mouth of a fool invites beatings, and the NKJV version of Proverbs 18:6 says the mouth of a fool calls for blows. I am sure a lot of people don’t know that this scripture exists in the Bible but the truth is that it does. So, you need to then ask yourself, what is your mouth inviting? We then read in Proverbs 17:28 that even a fool is thought to be wise when he keeps silent and discerning when he holds his tongue. So contrary to the perception that you must express yourself, keeping silent might actually do more good than speaking out at the wrong time.

In the face of arguments with your spouse would you rather air your views, express yourself, or hold your peace. Is the need to be right greater for you than the need to have a happy and loving marriage? Are you aware that your silence speaks more than your voice? I learned all of these in the midst of turbulence in my marriage and it solved for me more problems than I could ever imagine. And truth be told no-one can quote silence, yet it speaks greater than words.
A lot of women, including men though, find it hard to be silent when they have issues burning in their hearts. I am included in that category and we are all learning together. But I have learned to overlook a lot of things in my marriage for the singular reason of maintaining the peace of my home and because I hold my marriage in greater esteem than the will to be right. I have learned to pray hard before I speak if I have to speak at all. So, if those burning issues come, that I am struggling to overlook, I pray first and when I have prayed and still feel the urge to speak, I then ask God to speak through me and give me words to say. Proverbs 16:24 teaches us that pleasant words are like a honeycomb, sweet to the soul and healing to the bones. Your words count for something in your marriage. They can either heal it or tear it down. When you are angry, pause, and pray.
You will agree with me that it is quite difficult to not express oneself most especially when angry or hurt. I was in that position too, a long time ago, but I began to practice this silent treatment theory until it became me. Now I keep silent effortlessly and overlook issues easily now more than before because I have done it for many years.
It is also true that the grace of God played a big role for me and some people are of the opinion that some people have more grace to cope than others. The truth is that the grace of God is like a river that flows unending. When you go to the river to fetch water, the quantity of water you draw from the river is determined by the size of the container you go to the river to draw water with. A person who goes with a 50cl container will not draw the same quantity of water as the person who goes with a 15ltrs container or a 50ltrs container. In the same vein, the capacity of God’s grace that you receive is determined by your brokenness and willingness to allow God to fill you up with His grace. As long as you keep feeling you can handle it yourself you shut yourself up to God’s help. So, when it appears that some receive more grace than you do, it's not really so. It is that some have given God more room to act in them and through them than you have.
In closing I will say that I have achieved far more with my silent treatment theory than I could ever imagine. I have earned my husband’s love and respect by holding my tongue and allowing God who can speak louder than I can ever speak, speak through my silence on my behalf. I have seen positive results and I can’t trade this for anything else.
Mind you, I still speak when I have too. But I get to pray before speaking and I allow God to guide my words. And yes, I still slip sometimes and speak out of anger, but that happens so very infrequently. So, you might not slip into the silent treatment mode so easily but keep practicing it, keep being broken, and willing to let God do the talking on your behalf and never stop praying. 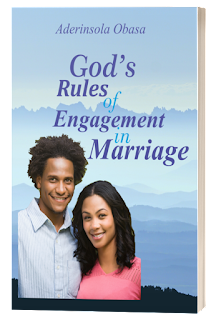 Here is an eBook authored by me titled "God's Rules of Engagement in Marriage". It's a wonderful guide to glorious marriage. You can get a copy of the book from my online bookshop by clicking here.